Aircraft noise easier to measure during the pandemic 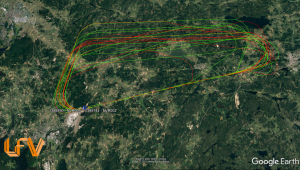 LFV recently participated in a research project at KTH. In less than 3 hours, 18 flights were made where noise was measured using microphones next to the runway.

“I am glad that we have been able to participate and contribute to the research. Several parties both internally and externally have participated and it is great that we have made this possible with joint efforts. These times are a unique opportunity,” says Mayte Åqvist, Deputy Unit Manager at the Arlanda and Bromma towers.

The project was made possible by the reduced number of take-offs and landings during the pandemic. In the past, when there were many aircraft in the air at the same time, it was difficult to get good measurements of noise. Qualitative noise data requires that the sound be measured from a single plane. On April 8, when the study was conducted, there were about 150 movements at Arlanda, while in previous years there were up to 700 in the same period.

18 flights in under 3 hours

Novair, which operated the flights, had no priority over other flights but flew the 18 flights in less than 3 hours. It was unique to be able to conduct a study in this way in these times: at a real airport for a day, together with other traffic, and with different flap configuration and speeds.

“There were two flights in the air at the same time to be able to examine two different profiles. It went well. The second flight started about 20 minutes after the first. The conditions were good. All staff knew what was going to happen in advance and they also made demands on weather and wind. Prior to the flights, a flight safety assessment was carried out,” says Mayte Åqvist.

The purpose of the study is to contribute to knowledge about aircraft noise and to be able to create quieter routes for the sake of the surrounding residents. In addition to noise being measured with the help of microphones, it was also measured, for example, how the plane’s wing flaps stand when the engine is started and when the landing gear is folded out.

“At Arlanda tower, we relate to the airport owner Swedavia’s environmental conditions where noise is regulated and make demands on approach and departure routes,” says Mayte Åqvist.

In addition to measuring noise with the help of microphones, the researchers will also have access to information from the aircrafts’ black boxes. The research project is funded by the Swedish Transport Administration and partners are KTH, Novair, Swedavia and LFV.